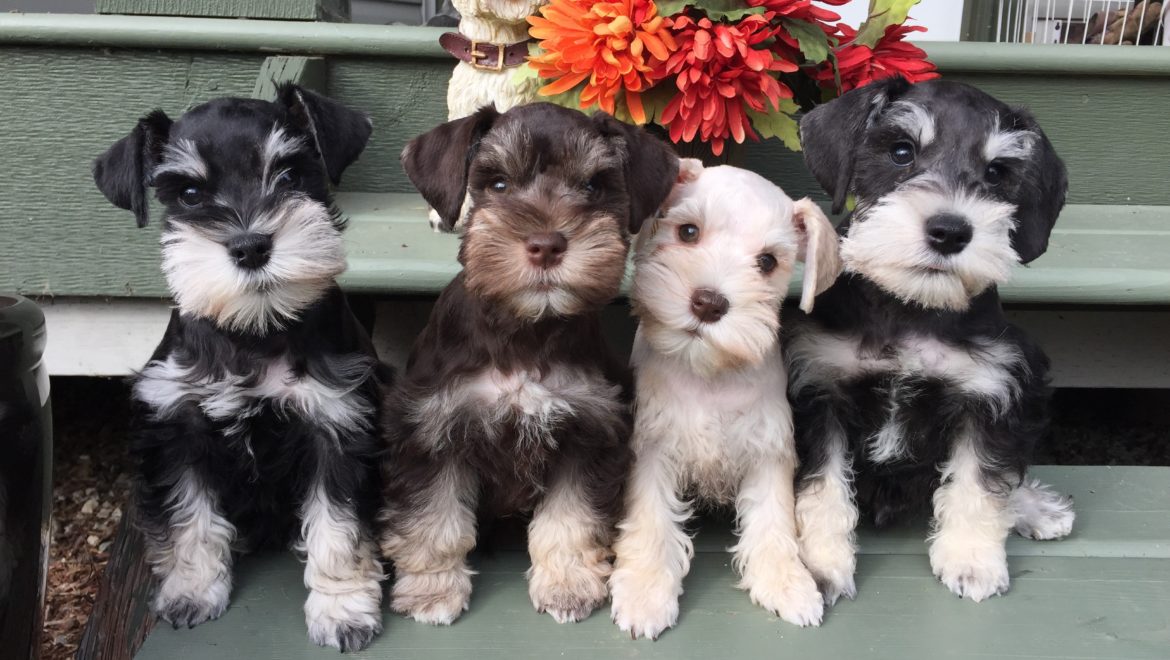 According to breed standard in Canada and the USA, there are only three recognized colors for the Miniature Schnauzer: Black, Salt/Pepper and Black/Silver. There are many more colors that exist but, since they are recessive to the three standard colors, they occur very rarely in the breed. The color gene is also separate from the pattern gene (ie. Salt/Pepper or Parti). If you want to show your dog, it must be one of the recognized colors however, both AKC and CKC will register a dog that is not a standard color, it just can’t be shown in a conformation class.

A short article on the regular Miniature Schnauzer colors can be found by clicking here.

Where did the recessive colors come from?

Because the original Miniature Schnauzers were a result of breeding the Standard Schnauzers with Miniature Pinchers, Affenpinsers, Miniature Poodles, etc. a gene pool for colors other than the three recognized colors was created. Some reputable breeders have selectively bred their dogs to encourage these “rare” colors while the staunch show breeders have selectively bred to discourage any of the rare colors.

An excellent article providing the history behind the recessive colors of Parti and Liver (Chocolate) can be found here. It is worth the read if you don’t believe the Parti or Liver colored Schnauzer are “real Schnauzers”

There are three solid colors of Schnauzers. If the parents of a puppy are both a solid color and have ancestors that are only solid colors, all puppies produced by these parents will only be a solid color and will never produce anything but solid colors. Solid color is a dominant gene. The color gene is also a separate gene from a pattern gene. A solid color Schnauzer may also have some white markings on the chin, chest or feet. 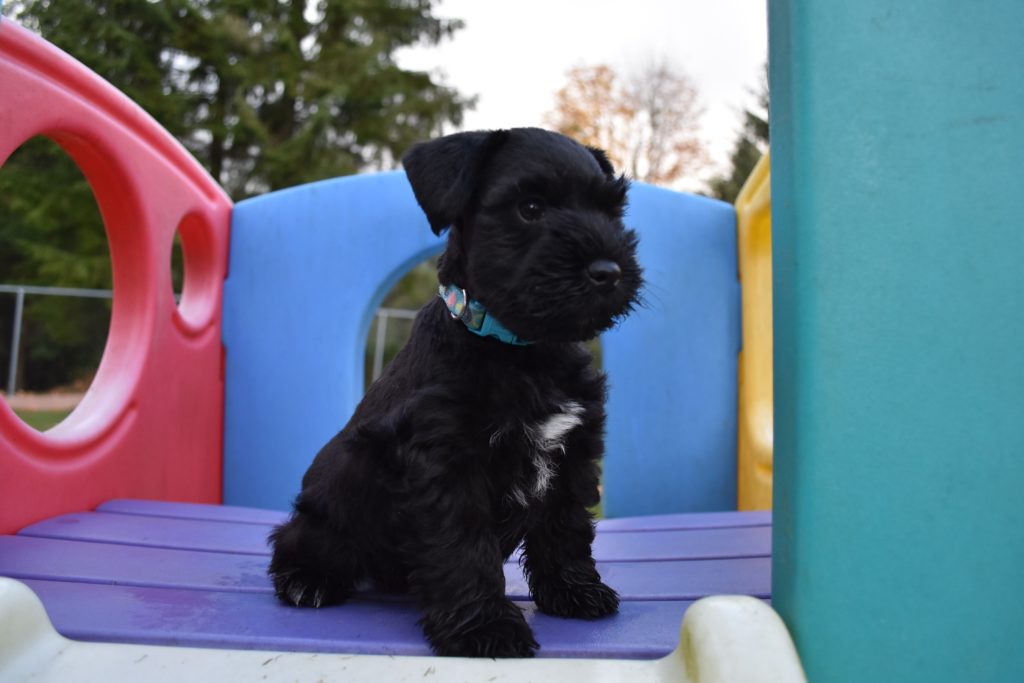 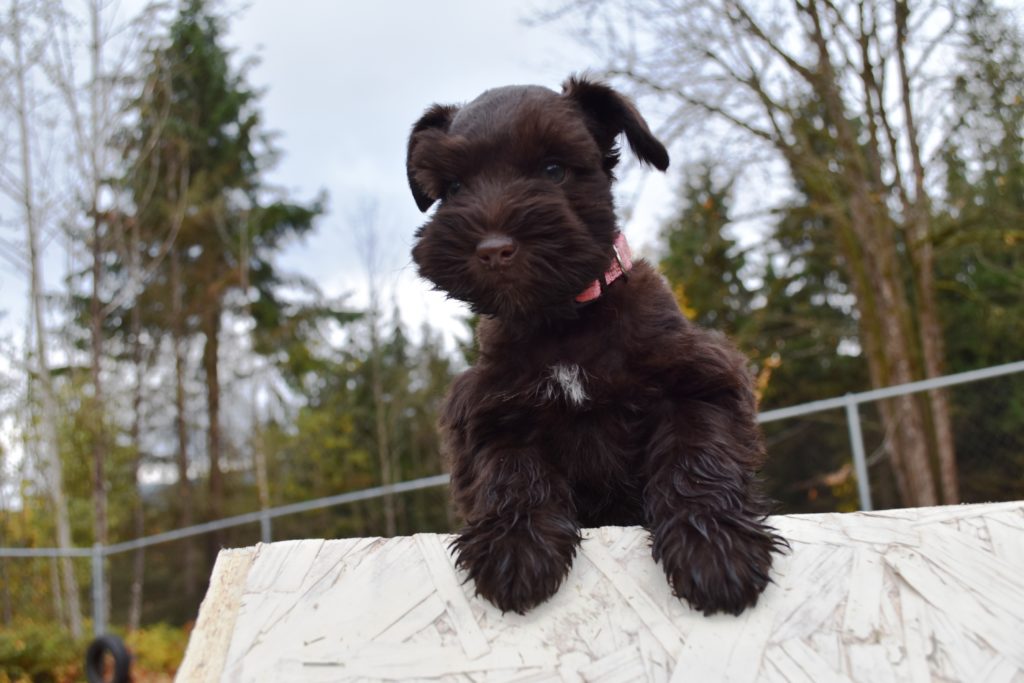 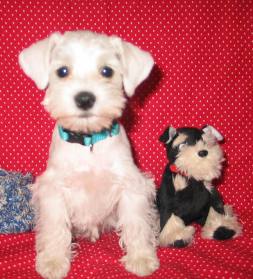 The Salt/Pepper pattern is the most common of all the Schnauzer patterns.. The traditional markings include a solid color body with light eyebrows, muzzle and cheeks, a light colored band across the chest, light colored socks on the legs and light coloring up the bum. The lighter markings can be white, cream or silver depending on the color of the body. Markings will often start off looking very tan or silver but will generally lighten as the dog ages. 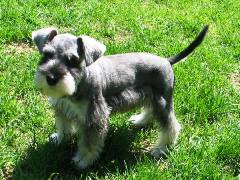 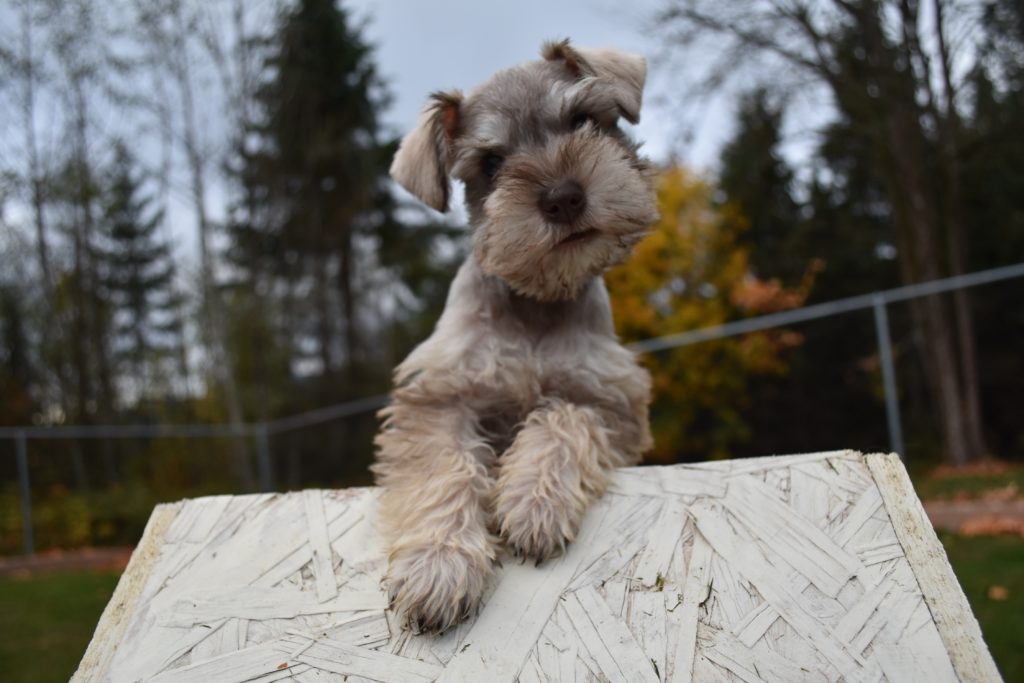 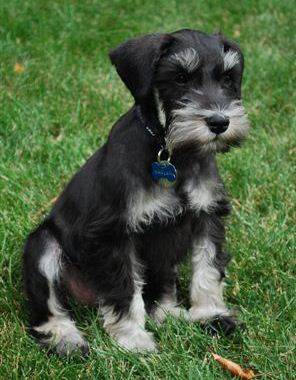 Parti is a unique pattern. It consists of a white coat with a color overlay. The color overlay may be black, grey or chocolate. The pattern is unique to each dog with no two Parti pups being alike. If the color overlay covers the dog from head to tail like a colored blanket, the color is referred to as “Blanket Parti”. Parti is the more recessive of the schnauzer patterns. The white coat in this pattern can also appear to have ticking or spots on it. Ticking is dominant over no ticking. The ticking will often be visible only after the dog has a haircut. Often, as the white coat grows out, the hair covers up the spots. 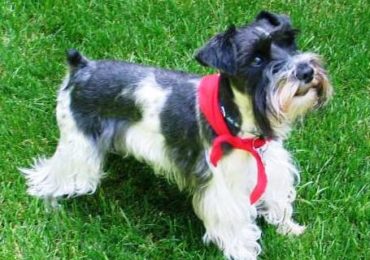 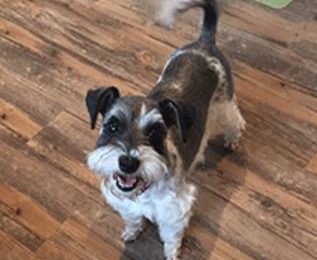 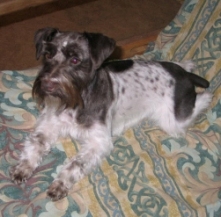 Sometimes we encounter a very rare combination of patterns and colors such as those listed below. We can end up with two patterns and/or a rare color in one puppy. This is very unusual. In both examples below, we have one dog that displays both the markings familiar with the Salt/Pepper pattern and the Parti pattern simultaneously. In addition to the rare combination of patterns, one of the puppies is also the very rare liver color. 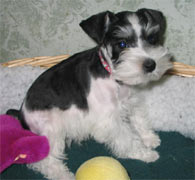 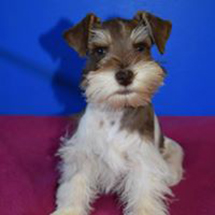 There is a gene responsible for fading that does not seem to be attached to color. It dictates whether the color of your dog will fade out over time. It may mean that a very black dog at birth will be silvery grey by the time it is one or two years old. It is very difficult to predict if puppies will retain their nice dark color as they age. If both parents have retained their dark color, puppies may as well but that is not always the case. We have also encountered examples of non-fading puppies from fading parents.

Here are some examples of faded color: 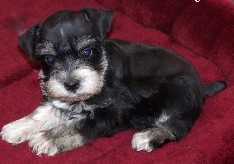 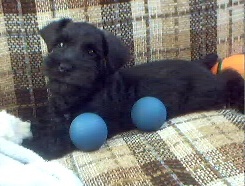 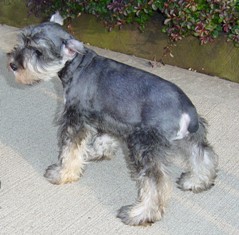 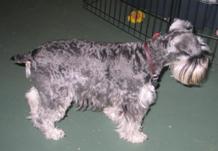 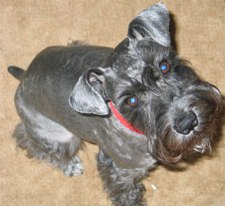 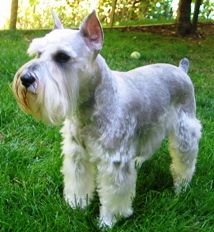 Note: This is a very brief summary of Schnauzer colors and patterns just to give you an idea of what is available.